Development of common repositories: the complex coordination of collaborative work

Current archaeological research practices confirm a strong trend towards the grouping of researchers and the sharing of data, which now requires the establishment of shared platforms. This change in practices is reflected in the shift from working locally to opening up to databases shared by several teams, several institutions and even several countries. Since 2005, the experience of seven projects carried out in the Traces laboratory (Architerre, ChasséoLab, Départ, Graph-Comp, Modelespace, Monumen, M&P) in collaboration with French and foreign partner institutions (Ministry of Culture, regional services, CNRS, universities, preventive archaeology organizations and companies, associations, etc.) has helped to clarify the principles of coordination, complexity, collaborative work and the impact of the choices made.


Chronocarto, a web-GIS for archaeologists (but not only...)

Chronocarto is a web-GIS developed since 2006 for the representation of cartographic data in Archaeology. It has been designed to allow for networking among researchers, non-specialists in GIS, from the acquisition phase to the enrichment of existing on-line documents. The platform is hosted on the Huma-Num TGIR and supports the concept of projects associated with a community of users whose rights can be modulated by an administrator. The concept of copyright has been introduced both at the data level and for the maps. Each project consists of a number of maps possibly grouped in different folders. The data can be spatial (georeferenced image files, vector files but also database or simple spreadsheet) or non-spatial (word processing files, images, videos, Internet links). Archiving is daily and incremental. The status of projects may change: ’in project’, ’in progress’, ’completed’, ’publishable online (public)’ and ’archived’ (not visible but stored for a minimum of 30 years). Currently, the platform manages over a hundred projects and several thousand maps. Some of the maps can be associated with thematic Atlas thanks to key words. The Atlas allows to query databases with simple questions like Where, When? What?. The results of the query are in the form of distribution maps. Chronocarto continues to be developed internally and its access is free.


Collecting, managing and promoting data on flint deposits and sites in France: for shared cartographic and publishing platforms.

Over the past ten years, several resolutely interdisciplinary Projets Collectifs de Recherche (PCR), have produced a set of descriptive data on the main flints associated with their primary and secondary deposits in southern and central France using a new method for the characterization of siliceous materials. This work is in the process of convergence and harmonization within the framework of a Research Group (GDR) supported by the CNRS and the Ministry of Cultural Heritage for five years. This new framework allows the community of scientists concerned in various fields to consider enhancing the value of data collected over several years on lithic georesources by adopting harmonized practices at different stages of the data life cycle, from collection to online publication, in accordance with FAIR principles.


Multi-scale mapping of a habitat on a rugged site: Silla del Papa (Spain)

As part of the ANR Archeostraits program, a mapping of the archaeological remains of the site of Silla del Papa (Southern Spain) was undertaken. It is made complex by a rugged topography, with strong unevenness and a ground covered by persistent vegetation. In addition, Late Iron Age buildings are embedded in rock walls at several levels, making traditional architectural analysis ineffective with 2D planimetry. Multi-scale 3D analysis, from the surrounding territory to the excavation of a house, requires an adaptation of 3D acquisition tools. For this purpose, we have used three technologies developed in the Traces laboratory to generate dense point clouds.


Learning through connecting: data management as a basis for meaningful use of legacy data - The African Archaeology Archive Cologne

For more than 50 years the African Archaeology at the University of Cologne has conducted field research in various parts of Africa, particularly in the Eastern Sahara and in Namibia. The focus was on environmental history and on rock art, with internationally renowned research schemes like ACACIA (Arid Climate Adaptation and Cultural Innovation in Africa) and ‘Rock Paintings of the Upper Brandberg’. Much of it was published in close co-operation with the Heinrich-Barth-Institut, including six voluminous catalogues of rock art and 26 monographs on African archaeology. Most of the materials accumulated in the research projects are not digital in origin and are now digitized and made accessible in the digital online archive AAArC (African Archaeology Archive Cologne). Besides being a repository for tens of thousands of pictures, also whole documentations of excavation are made accessible here. Digitising the repositories of Cologne’s African Archaeology within the AAArC project started in 2012, using the DAI (German Archaeological Institute) data-interfaces Arachne, DAI-Gazetteer and DAI-Zenon. Today AAArC opens web access to thousands of fieldwork documentations, pictures and tracings of rock art. Open access interoperability of metadata integrated to picture formats is achieved. Exploiting database management systems of highly varied structure in a digital repository is achieved through collaboration with IANUS (Research Data Centre Archaeology & Ancient Studies), a national long-term preservation digital archive for archaeological data. AAArC offers participation in digital heritage content management, thus perpetuating the long lasting cooperation of Cologne’s African Archaeology with a number of African countries. The AAArC online archive aspires to make the full range of archaeological documentations accessible online and not just pictures. Thus AAArC ultimately enables a digital homecoming of complex research data to their countries of origin.

Online since 2009 and currently in its 4th version, the webGIS ArkeoGIS now benefits from a long experience dealing with compatibility issues and the interoperability of apparently disparate databases. Effectively, data originating from archaeological and (paleo-) environmental studies, whether historic or current, is now available online for professionals via a secure interface. At time of writing, 75 databases are consultable and searchable through an ergonomic interface, in total the data from over 100 000 sites and analyses are exploitable. A unique import and export protocol for data extraction then allows for the data to be reused on other software. In this publication, the stops and starts of data sharing will be brought to the fore after a presentation of the chosen governance solutions, in hoping that we will be able to continue to connect digital projects.


ArchéoFab: A program for sharing data and knowledge

ArcheoFab - Archeologies of the Paris Basin (ABP). Network of sites and network of actors is a shared program of the UMR 7041 ArScAn. Since its inception, its objective has been to share information and know-how related to the spatial dimension of archaeo-historical information, first within the ArScAn UMR, but also towards a broader community. In this perspective, the ABP programme, unlike a research team or project, does not in itself produce its own results in terms of archaeological knowledge. ArcheoFab operates as a federation and is based on the projects that constitute it and that wish to associate freely with it in the spirit of digital factories. This participation provides access to the infrastructure managed by ABP (data, tools and training) and personalized project support. Each project retains its own financial and, above all, scientific autonomy. The dialogue between the coordination of each project and the programme leaders makes it possible to define priorities for launching methodological and instrumental and/or training development actions, useful to each project and as shared as possible. Finally, the objective of this project assistance is to respond to the principles of FAIR and to promote the sharing and sharing of data, practices and tools while ensuring the construction of the most open digital data heritage possible. This document aims to provide a retrospective analysis of this experience of sharing over the past few years, its tools and mode of governance and to consider its evolutionary prospects.


The PACTOLS Thesaurus, a controlled and shared vocabulary system for archeology

Created by the Frantiq network (Federation and Resources on Antiquity), initially for the documentary indexing of scientific literature, PACTOLS is a unique reservoir of thematic metadata dedicated to archaeology. The thesaurus manager on which it relies, Opentheso, also provides it with technical capabilities for openness and interoperability that complement its standardization. In addition, the assignment of a permanent identifier to each concept makes each one a web object, identifiable anditable. PACTOLS is therefore a pivotal vocabulary that meets the standards of the semantic web and open science. It respects the FAIR principles: it can be consulted and freely accessible online, it is interoperable and reusable. Its lexical and normative characteristics represent a tool with a rare potential, which is now available to all actors in archaeology. The PACTOLS development project, conducted as part of the MASA Consortium of the Huma-Num Very Large Research Infrastructure, is intended to provide the archaeological community with a reference vocabulary that facilitates the sharing of scientific data and productions in archaeology on the web. It is oriented in two directions: on the one hand, it consolidates the semantic structure that leads to the reorganization of domains, facilitating navigation in the thesaurus. On the other hand, terminology content is enriched, in particular by the addition of speciality vocabularies and by alignment with scientific vocabularies and programs in the field, which are available on the web. The reorganisation of the thesaurus is carried out in close collaboration with the experts concerned. To this end, the modalities of dynamic contribution to the thesaurus are extended to all actors in the discipline, on the basis of specific authorization levels. A larger community is organized, trained and supported in the shared handling of the thesaurus. Because PACTOLS, as a reference vocabulary, is recommended as soon as excavation data are processed, for example at Inrap. It is also associated with programs to promote research data and integrated by several archaeological journals into their production, via the editorial production chain Metopes in XML-TEI.PACTOLS, a common reservoir for metadata in archaeology and archaeoscience, is a brick to data interoperability. It can be easily integrated into simple database systems or organized more powerfully with ontologies for a web of linked data. 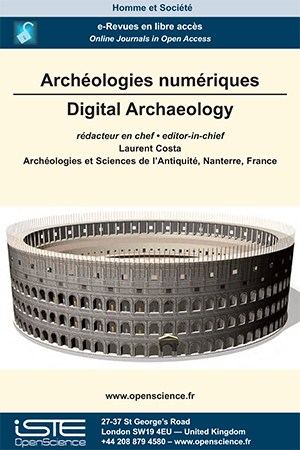