The dynamic of edge dipoles dislocations nucleation’s from free lateral areas, near the thin film-substrate interfaces obtained by heteroepitaxial growth is discussed. The analysis method uses the superposition of image dislocations and Boussinesq surface forces distribution. The theoretical calculation is carried out using the conjugate gradient method and Mathematica code. This work reveals how the stability of edge dislocations dipoles, nucleated from lateral surface is very important to evacuate strains Misfit between mesh parameters.

The pipeline was primarily perceived as a means of transporting different materials. In this study, we looked at the flow of phosphate pulp in the pipeline linking the Khouribga mine pole (Morocco) and the Eljorf-Lasfar industrial platform in El Jadida (Morocco). We carried out a mathematical modeling on a number of parameters influencing the process of conducting phosphate through the pipeline. In this way, we have been interested in modeling the linear or regular load losses, the hydraulic gradient, the friction factor, the roughness of the pipe and the fluid mechanics of the phosphate pulp. The result is grouped into a program on Matlab that can provide us with the pressure in any point of the pipeline and the behavior of the pressure drops. In addition, this program allows us to follow a geographical route followed by the behavior and behavior of the piezometric line along the pipeline.

The electrical properties of single-walled carbon nanotubes (SWCNTs), which might be conductive or semiconductive materials depending on a number of key parameters, are a radical different type of materials. In this study, we will predict the feasibility to elaborate a nano-capacitor using the SWCNTs material. A calculation of limit of the capacitance and curves will be presented according to the characteristics of the nano-pacacitor such as capacitor vs applied voltage, capacitance vs thickness and so on. The electrical energy of the nano-capacitor will be discussed and curves of the dependence of the capacitance vs stored energy is presented in this study. These finding are hopefully expected to open new areas of investigation and might lead to potential applications in nanoscale science.

In this paper, a parametric uncertainty analysis of a quarter car system is proposed. For a reasonable evaluation of its dynamic behavior, the influence of the uncertainty of some parameters is taken into account. The dynamic equations of the quarter car system are solved by using the polynomial chaos method combined with the ODE 45 solver of Matlab. The effect of the random perturbation of the spring on the dynamic response of the system is discussed. This method is an efficient tool for uncertainty propagation. To obtain more accuracy, the polynomial chaos results are compared with direct simulations.

Morocco has a significant solar deposit considering the values of the duration of insolation recorded on almost the whole national territory exceeding the 2000 hours annually and reaching even 3900 hours in the highlands and the Moroccan Sahara. As a result, the amount of energy received on the ground exceeds 5 kWh / m² on average in several regions of Morocco, ie nearly 700 kWh / m² per year in the north and 2263 kWh/m² in the south, which favors the use of electricity. solar energy in different fields such as electricity generation, agro-food drying, etc. the knowledge of this deposit is of major interest to design and size solar energy systems. Thus, good sizing is possible only if the measurements are available continuously in space and time. The best way to do this is to have a series of meteorological and physical measurements from an Android operating system, and a microcontroller that is connected to sensors for each measurement, the collected data is sent to a server centralized system that processes information.

Failures, errors and many other irregularities represent the main threats to systems-of-systems. We present two scenarios that trigger these threats. The first scenario is when a disruption disorganizes a part of the system or even the entire system and the second scenario is when an exploitation of a vulnerability occurs. In this article, we present our approach to managing the triggers of threats targeting the systems-of-systems. It is based on the use of dashboards to monitor potential disruptions of systems-of-systems. Recommendations for the management of vulnerabilities and resolution of these problems are also mentioned in the last section of the article.

In the face of current competitive and economic demands in the industrial sector, numerical simulation tools, such as finite element methods, are increasingly applied to the design problems of mechatronic systems. Many problems require a large number of simulations to evaluate an objective function. However, for many cases, a single simulation can take several minutes, hours, or even days to converge. As a result, simulation-intensive tasks such as sensitivity analysis, reliability analysis, optimization, and reliability based design optimization become impractical or almost impossible, as they require hundreds, thousands or even millions of simulations. The construction of the approximation models becomes the most robust method to remedy this problem. These models, known as metamodels, make it possible to approximate as much as possible the input-output relation of the finite element simulation model, all with the aim of reducing the evaluation cost. Finally, tasks with large number of simulations can be implemented using the meta model built. This article present the most popular metamodeling techniques, their validation methods, as well as examples of comparative studies for an optimal choice of the metamodel suitable for the problem.

Fluid-structure interaction (FSI) problems play an important role in many technical applications, for instance, wind turbines, aircrafts, injection systems, or pumps. Thus, the optimization of such kind of problems is of high practical importance. Optimization algorithms aim to find the best values for a system’s parameters under various conditions. In this paper an approach for multi-objective optimization of FSI problems is presented. It is based on the Backtracking Search Optimization Algorithm (BSA), a new evolutionary algorithm for solving real-valued numerical optimization problems. A partitioned coupling procedure is used for the numerical simulation of the FSI problem and the results of the optimized front obtained using non-dominated BSA algorithm are then presented.

The purpose of this paper is to present a new Reliability Based Design Optimization (RBDO) method. This one consists in safety factors derived from Optimum Safety Factors (OSF) method which is coupled with Particle Swarm Optimization (PSO). Such method eliminates the employ of reliability analysis in RBDO. The objective of this optimization process is to reduce the computational time comparing with classical RBDO process. The illustrative study presented in this paper shows that the coupling of Optimum Safety Factors method with evolutionary algorithm performs the RBDO of a mathematical model. 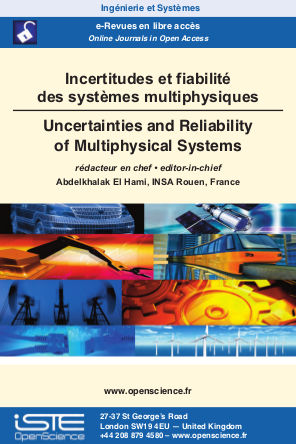