Individual, Family and Contextual Determinants of Malnutrition among Children Under Five in Cameroon

Child malnutrition remains a major public health problem around the world, particularly in Africa. In Cameroon, for example, the Demographic and Health Survey (DHS), carried out in 2018, shows that three out of ten children under five are victims of malnutrition. The objective of this study is to find the individual, family and community factors associate with this phenomenon. The methodology used to achieve it relies mainly on data from the abovementioned survey and the multivariate multilevel models. The results of the study showed that, all things being equal, the children most affected by malnutrition are those whose two parents are uneducated or poorly educated and whose mothers are not exposed to media and autonomy in decision-making. These children are male, have already celebrated their first birthday, were born with a low weight, were recently anemic or ill and are separated from their previous siblings by less than 24 months. Likewise, the results of the study revealed that these children live in poor households and in ethnically homogeneous communities and these have no or little exposure to media. In view of the inter-community and intra-community variances, individual and family characteristics are the factors which most explain the variation in child malnutrition in the studied milieu. Future interventions in this area should take into account the factors highlighted in this study.


Risk Factors for Anemia in Children in the DRC: An Ordinal Logistic Regression Approach to the DHS-DRC II Complex Data Sample Weight Model

Anemia is one of the most common and difficult nutritional problems in the world. The 2011 WHO suggests that anemia has affected approximately 800 million children and women. More than half of the children in the South-East Asia and Africa Regions (53.8% or more) are anemic, with the highest proportion (62.3%) coming from the African Region. The World Bank estimates its prevalence among children in sub-Saharan Africa at 67.8%, with 63.9% in Central Africa. WHO and UNICEF stress the urgency of combating it and emphasize the importance of recognizing its multifactorial etiology, a prerequisite for the implementation of effective control programs.


Structure validity of psychometric scales in oral health: example of the perception of oral health in general population

In this article, we show that structure validity is an essential step in the psychometric validation of subjective measurement scales, the partial credit model is used to study the structure validity. We take as an example, the psychometric validation of the GOHAI scale (General Oral Health Assessment Index) for the general French population. The partial credit model verifies the unidimensionality of the GOHAI scale. 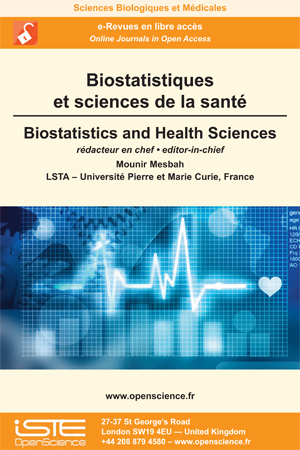